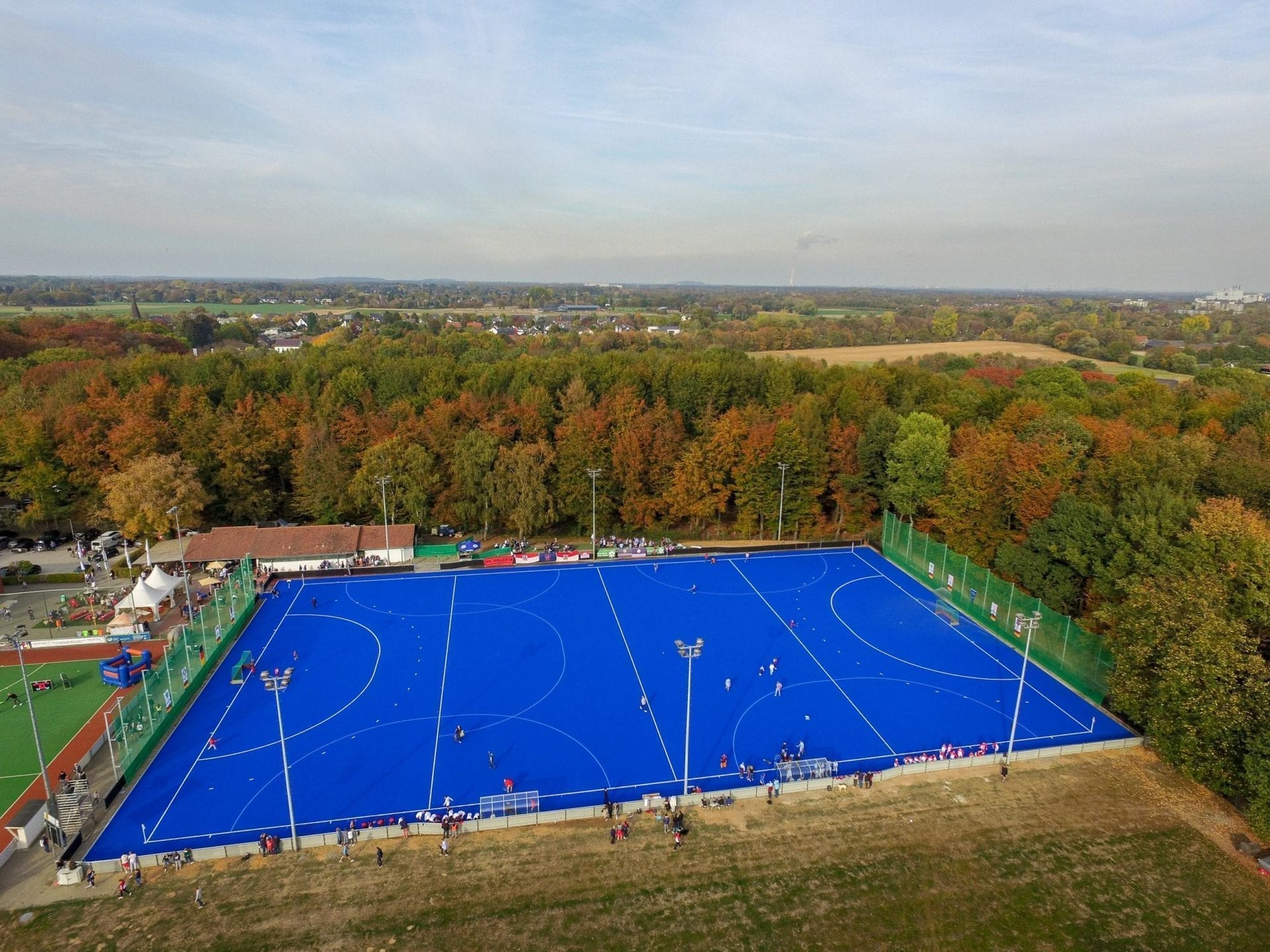 Poligras Tokyo GT is the name of the new synthetic turf system for hockey that has been developed by Polytan as official Global Supplier to the FIH (International Hockey Federation) for the 2020 Olympic Games in Tokyo. Not only is the dark-blue playing field faster than ever before, but the turf fibres also consist predominantly of a bio-based synthetic from Braskem. The hockey players at Crefelder HTC are delighted with the world’s first Poligras Tokyo GT, which was installed at the Gerd Wellen hockey facility in Krefeld in September 2018.

Crefelder Hockey und Tennis Club 1890 e. V. (Crefelder HTC for short) has nearly 600 active hockey players and is one of the most successful hockey clubs in Germany. The men’s field hockey first team has played continuously in the top division since 2001, for example, winning the German championships in the 2005/2006 season and the European Cup Winners’ Cup in 2006/2007.

Top-flight hockey tournaments are regularly held at the club’s own Gerd Wellen hockey facility, the most recent one being the German Field Hockey Championships (FINAL FOUR 2018) in June. The club, the city and the state have jointly invested around 500,000 euros in a new hockey pitch to ensure that the next round of the FINAL FOUR 2019 is also a resounding success in May – and, of course, because, the existing Sidney synthetic turf had become outdated and worn after 15 years.

Poligras Tokyo GT, which has been developed by Polytan with a view to the 2020 Olympic Games in Japan, was the system of choice for the new pitch. Club manager Robert Haake on the new synthetic turf: “Poligras Tokyo GT is currently the best hockey turf in the world and we are delighted to be the first ever venue where it has been installed.” What’s more, he anticipates that the blue base will exert a strong pull on other teams. “We expect that many national teams will want to hold training sessions at our facility,” continues Haake. Two more pitches with a Poligras Tokyo GT system are planned and completed in Mönchengladbach and China respectively.

Forward-looking investment in its sports facilities is a long-standing tradition at Crefelder HTC. The first synthetic pitch was installed as early as 1990 and it has since been replaced twice – in 2003 and 2018. When Poligras Tokyo GT was installed in 2018, the shock-absorbing base had finally worn out after 28 years and it was replaced with a 35 mm thick PolyBase GT elastic layer. PolyBase GT stands out for its high level of environmental compatibility – as does the Poligras Tokyo GT synthetic turf system. This is denoted by the code GT, which stands for the new GT Green Technology label.

The Poligras Tokyo GT turf achieves a better environmental balance by using the bio-based plastic I’m greenTM by Braskem, the world market leader in this field. Renewable raw materials make up 60 per cent of the polyethylene (PE) base material for the filaments. It is possible to increase this proportion to 100 per cent PE base material, but at a higher cost. As was shown during testing, not only does the new material improve the eco-balance of the synthetic turf, it also optimises the playing qualities of the surface: the ball roll distance increases by up to 25 per cent compared with the predecessor product. This promises to make games of hockey even faster and more dynamic, with even more precise moves.

The PolyBase GT elastic layer is the most recent arrival in the Green Technology product family of Polytan. The product PolyBase GT owes its sustainability to a newly developed binder for the permanently elastic bonding of granules whose manufacture produces lower CO2 emissions.
Quite apart from the ecological aspects and improved playing qualities, the blue colour of the new Poligras Tokyo GT synthetic hockey pitch in Krefeld is also a winner. The blue playing surface has been all but standard practice at top-flight hockey competitions since the 2012 Olympic Games in London. It sharpens the contrast with the yellow hockey ball and makes it easier to follow the progress of play. This benefits players, spectators and, above all, television viewers. Crefelder HTC has even designed a playing field that exceeds the required dimensions of 100 x 60 yards (91.4 x 55 m) for the purposes of television coverage, which means LED perimeter systems can also be set up for television broadcasts.