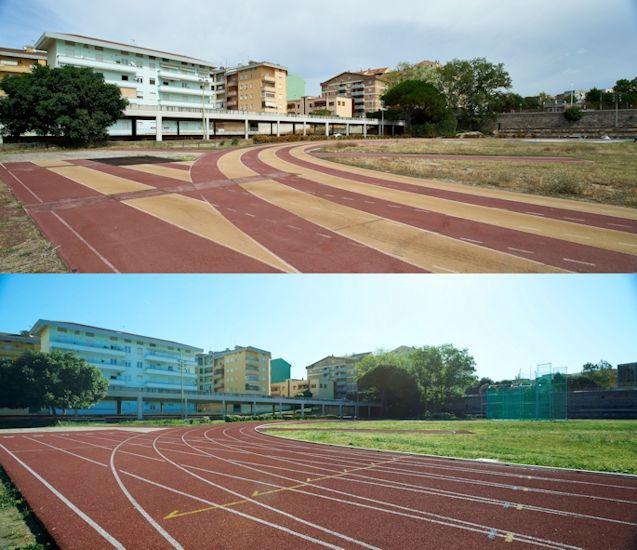 A time-saving and eco-friendly option for making running tracks that are showing their age as good as new again is to have the synthetic surface professionally re-topped. This entails laying a new wear layer on top of the existing installation – so there is no need to excavate and dispose of the old material. In its portfolio Polytan has two re-topping products that can be installed on any existing surface: Rekortan M RT, the water-impermeable system coated in situ, and Spurtan WS RT, the structural system that is permeable to water. One is a PUR coating with strewn EPDM granules, the other a spray coating.

Running tracks with elastic synthetic surfaces such as we know them today have been the only acceptable surface for athletics events at elite level since the Olympic Games in Mexico in 1968. The functional qualities they provide for sport, such as energy enhancement and shock absorbency, mean they are now part and parcel of modern sports facilities – whether the running tracks are for schoolchildren, amateur or professional athletes.

Intensity of use and type of system determine the useful life

The useful life of a synthetic surface generally varies between 10 and 30 years, depending on the intensity of use and the type of system that is installed. In principle, a surface that is coated or poured in situ (also called a solid synthetic surface) is much more hard-wearing and long-lasting than a structured surface (sometimes referred to as a spray coating or spray surface). Since spray coatings have a thinner wear layer than products poured or coated in situ, they wear out much sooner due to the effect of spikes, for instance. In addition to abrasion, the running tracks harden over time and become brittle – an ageing process of synthetic floors that occurs relatively quickly in the case of prefabricated strips. Polytan’s product range includes only synthetic surfaces that are installed in situ in liquid form, allowing them to be optimally adapted to the local circumstances.

The condition of the old surface is the decisive factor

Whether re-topping makes sense will depend on the condition of the existing running track. This is determined in a defined test procedure in which variables such as shock absorption and tensile strength are analysed alongside the evenness of the surface and the general condition of the substrate. If the re-topped track is to be certified as meeting the requirements for international competition laid down by the IAAF, the governing body of world athletics, the inspection is much more intensive than if the aim is merely to refresh the look of the track. For successful re-topping it is immaterial what method of construction was used for the initial installation, whether it was laid in situ or as prefabricated strips, or who the original manufacturer was: the cost of rehabilitation is determined only by its condition.

If the substrate is suitable for re-topping, the old surface is first cleaned thoroughly and any damaged areas are improved. The next stage is – if necessary – to adapt the existing sports equipment, such as the sandpit for the long jump, to the higher level of the future surface. The third and final stage is the actual re-topping process. This is when a new wear layer is laid seamlessly on the existing old surface, optionally as a PUR coating with strewn EPDM granules or as a spray coating. Once hardened, the rehabilitated running track can no longer be distinguished from a new installation.

The Rekortan M RT (PUR coating) and Spurtan WS RT (spray coating) re-topping systems from Polytan can be used on tracks that are permeable to water as well as those that are impermeable. Both rehabilitation solutions have structured surfaces, are suitable for spikes and therefore offer the optimum base for professional applications.