When the local sports club in Sittensen, northern Germany announced that it would be renovating its facilities, one of the town’s roughly 11,000 residents had a vision. Egbert Haneke wanted the new grounds to be outfitted with synthetic surfaces, convinced as he was that they are a durable, sustainable and environment-friendly alternative to natural grass.

It was by no means easy, but thanks to an abundance of passion, perseverance and persuasion, Haneke helped turn the upgrade at VfL Sittensen into a pioneering ecological project.

“Generally speaking, this process began a little over three years ago,” says Haneke, a full-time university lecturer in fine arts in Hamburg. “I was initially just a family member [of one of the kids] at the local sports club.”

He told them it was all a question of seeking out the right materials, advanced technologies, scientific documentation and innovative industrial partners. Hiring a tireless coordinator would also help build a facility that pushed the envelope in terms of the environment.

Haneke’s vision was eventually adopted in the form of an ambitiously green project that would go on to make an impact far beyond the town and club of VfL Sittensen, which was founded in 1904.

With a long tradition of promoting young athletic talent, the club currently offers 17 disciplines and has just under 2,400 members. When it comes to football alone, Sittensen has 18 teams and 420 active players.

The numbers demonstrate that the sports club plays a key role in fostering social participation in the small town located between Hamburg and Bremen. In addition, the club’s facilities are also used by 1,200 pupils from a neighbouring cooperative comprehensive school. Haneke understood that the grounds had to be able to cope with such heavy usage and, in line with the founding statutes of the comprehensive school, it should be a type C sports facility.

Only a synthetic turf pitch could meet these high demands, not only to achieve the longest possible service life, but also to keep water and artificial fertiliser consumption to a minimum, not to mention maintenance and operating costs.

In the middle of the planning stage, however, a heated discussion on the use of rubber granules and microplastics burst onto the scene, triggered by a study (which the researchers later distanced themselves from) by German research organization the Fraunhofer Institute.

“In my opinion,” says Haneke, who disagreed with the findings, “the criticism was unjustified and not sufficiently studied scientifically. Even when planning the facilities, we looked in-depth at the much-discussed problem of microplastic emissions from synthetic turf facilities.”

Haneke did not believe that reliable scientific studies on the topic existed, so he decided to initiate a large-scale research project to “determine the level of microplastic emissions from synthetic turf sports facilities and how to avoid them.”

With the sports club and residents alike supporting him, Haneke got started. He managed to convince leading politicians such as Olaf Lies, Minister of the Lower Saxony Ministry for the Environment, Energy, Construction and Climate Protection to become patrons, while also getting industry partners involved – Polytan being one of the first.

“They didn’t take me seriously in the beginning,” he says. “And why would they? Someone from Sittensen just called up and wanted to take on a project like this out of the blue?” But Polytan’s Managing Director and Head of Product Management Friedemann Söll was quick to recognise the benefits of the Sittensen “sports facility laboratory” to scientifically prove the sustainability of new materials and technologies. 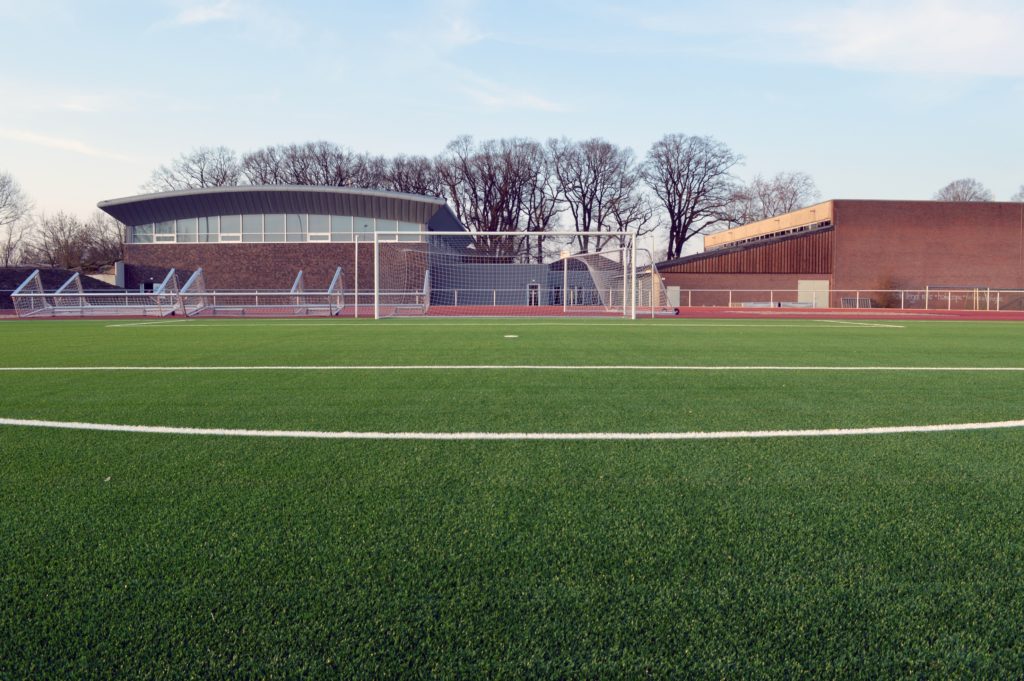 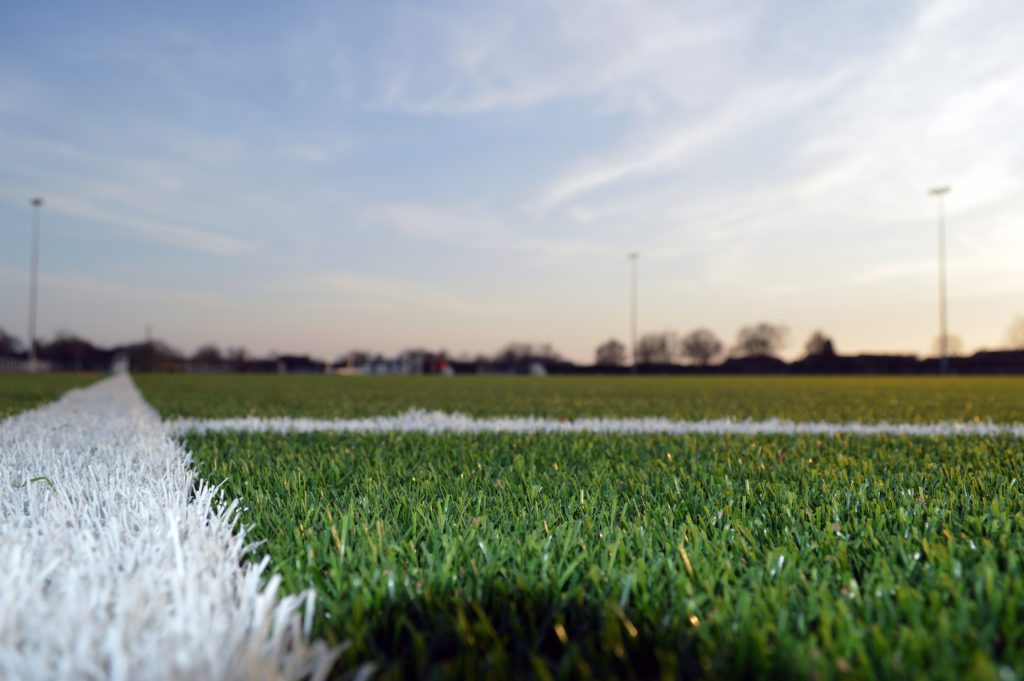 Polytan provided knowledge and material for the “pilot facility”. The company laid a synthetic turf featuring PE yarn sourced from renewable materials (in this case sugar cane) instead of fossil materials. Furthermore, the production chain has been certified carbon-neutral. “This turf has a high percentage of PE yarn compared to conventional synthetic turf systems, so we were able to limit the amount of infill to around 2 kg/m²,” explains Haneke. In older synthetic turf, around 6 to 8 kg/m² is typical.

One thing is already clear: the reduced quantity does not affect the high technical and athletic quality of the turf. The rubber granules used for the infill are made from up to 70 % hemp and chalk, i.e. natural raw materials.

One pitch has rubber granules on it, while the other has a natural infill. “The infill itself on one of the two pitches consists of small, rounded wood chips, which were tested here for the first time with Polytan,” says Haneke. Unlike cork, the wood chips do not rise to the surface. The granules, named BrockFILL, are now officially offered by Polytan following positive experiences in Sittensen.

All of this is accompanied by a world-first prototype of a gutter filter system by Hauraton. It cleans rainwater runoff from sports facilities using a highly effective substrate filter before the water is collected. In preliminary trials, this reduced the amount of microplastics that were released by 98 %. The system is now in serial production.

From a scientific standpoint, the Institute for Energy and Environmental Technology is documenting the research project to produce a neutral expert report. It goes without saying that one club could not shoulder such a massive project alone. It relied heavily on industry partners providing their knowledge and test materials, as well as assistance from the German Federal Environment Agency (Umweltbundesamt, UBA) and the German Federal Environmental Foundation (Deutsche Bundesstiftung Umwelt, DBU), which supported the research project financially. “This project has produced neutral, lobby-free research, the results of which are accepted as part of an evaluation and assessment by the European Chemicals Agency (ECHA),” Haneke says.

“Our goal with the results of this research, and others, is to assure sports clubs, associations, municipalities and sponsors regarding the ecological footprint of synthetic turf pitches of this type, so that they can make decisions with their eyes open,” he adds. “Based on the expected results, we also want to ensure that more synthetic turf pitches are built in Germany and Europe from 2022 onwards, so that children have the opportunity to participate in sports all year round and clubs can find robust solutions to the medial tendencies of our society.”

The project’s early successes have already resulted in cooperation with the German Football Association (Deutschen Fußballbund, DFB), which has hosted two trial matches in Sittensen as part of DFB regional competition. They are also evident in the never-ending stream of trade visitors and representatives of municipalities, clubs and associations who come to marvel at the ‘Wonder of Sittensen’ in person.

A pioneering project in the Lower Saxon municipality of Sittensen illustrates how sustainable sports facilities can be today. This is thanks to Egbert Haneke, father to one of the players at the club, and now club chairman. 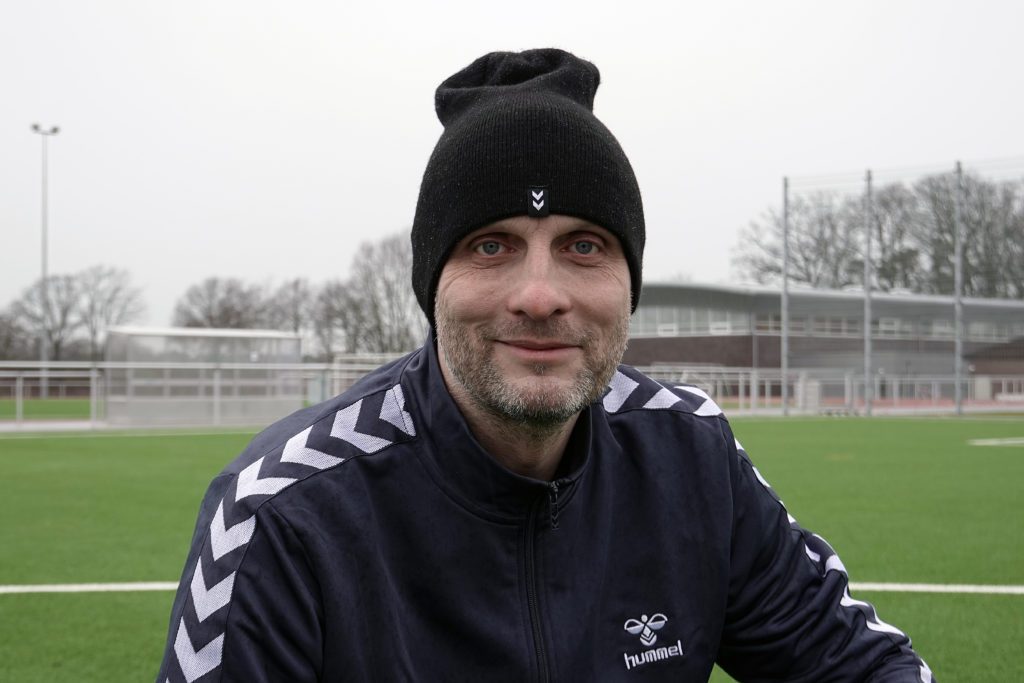 ON TOP: Mr Haneke, what gave you the idea to initiate such a large project as a “mere” player’s father?

Egbert Haneke: Sport is crucial for social interaction, particularly in childhood. The COVID-19 pandemic proved this once again. It is important to me that our young people not only meet their friends online, but in the real world, too. And where better than playing sport at the club? The VfL therefore plays a key role in our social life in Sittensen.

ON TOP: How did you go about it?

Egbert Haneke: As a university lecturer, I am well-versed in the art of starting a project with the question: Where are we headed? This is also how I approached our ‘sustainable sports facility’ project. I presented the concept to the club’s board at the time, the mayor and village residents. Everyone went along with it and I was able to get the ball rolling. I now know that was a little naïve.

Egbert Haneke: Because I just got started – just as I would do at university. But luck was on my side. The topic was virulent because of the media coverage surrounding a particular study. I was therefore able to get prominent supporters such as Lower Saxony’s Environment Minister, Olaf Lies, on board relatively quickly.

ON TOP: Was it smooth sailing with regard to the industry partners?

Egbert Haneke: Initially, I wasn’t taken seriously. But we can’t blame the companies for that either. Someone from Sittensen just called up and wanted to take on a project like this out of the blue? Yet perseverance always pays off. After looking at the concept (presumably to stop me pestering them), the companies recognised the opportunities that arose from research conducted at the Sittensen sports facility.

ON TOP: Why was the topic of synthetic turf in the spotlight?

Egbert Haneke: Many people in densely populated places want to play sport. Those in charge have to ensure that they provide appropriate infrastructure that is capable of facilitating the necessary hours of play. Synthetic turf systems are much more suitable because, although they require higher investment initially, they are less demanding and less expensive to maintain. Added to this are significantly better usage throughout the year, seasonal independence and long life expectancy. During the planning phase, the Fraunhofer Institute published a consortium study that assessed synthetic turf pitches as being extremely polluted, yet it was financed by companies that use microplastics. The press pounced on this.

ON TOP: This can’t have been good when trying to build such a facility. How did you react?

Egbert Haneke: I said: ‘We’re going to be proactive and see if we can arrange an independent study to explore if and to what extent pollutants from synthetic turf actually get into the environment and into the water.’ I set out with this basic premise. Working together with our partners Hauraton – who developed the rainwater management system – and Polytan, the research was started, supported by the Institute for Energy and Environmental Technology. The study results will be published at some point over the next year.

ON TOP: And what is the situation currently?

Egbert Haneke: We’re already seen as a pioneering project in terms of sustainability. Which, by the way, not only includes the sports facilities, but all the club’s activities as well. And in the meantime, I have been elected to the board.

Natural infills – the green side of the pitch

Elastic granules in a synthetic turf improve the playing properties. However, due to the size and the material properties of the rubber granules, they are considered a microplastic. In the medium-term, an EU ban will prevent rubber granules being used as an infill. The big question for the industry now is: How can the high […]
Read More »

In the course of the microplastics debate, artificial turf has become a topic of discussion. However, an ecological footprint calculated by the University of Zurich attests to its excellent environmental properties. And that’s before taking into account the circular economy practised by Polytan, and the carbon-neutral production of many Polytan products. On behalf of the […]
Read More »

FIFA Quality Programme: The most important certification for artificial turf (2)

FIFA, the global governing body for football, assigns its Quality Label only to artificial football turfs that meet the highest standards. What are the basic principles and parameters FIFA uses to determine such quality? FIFA’s benchmark for artificial football turf products and systems is a natural turf in good condition. The strict testing procedure consists […]
Read More »
We Make
Sport.
Subscribe to newsletter
Youtube Facebook Instagram Linkedin Xing