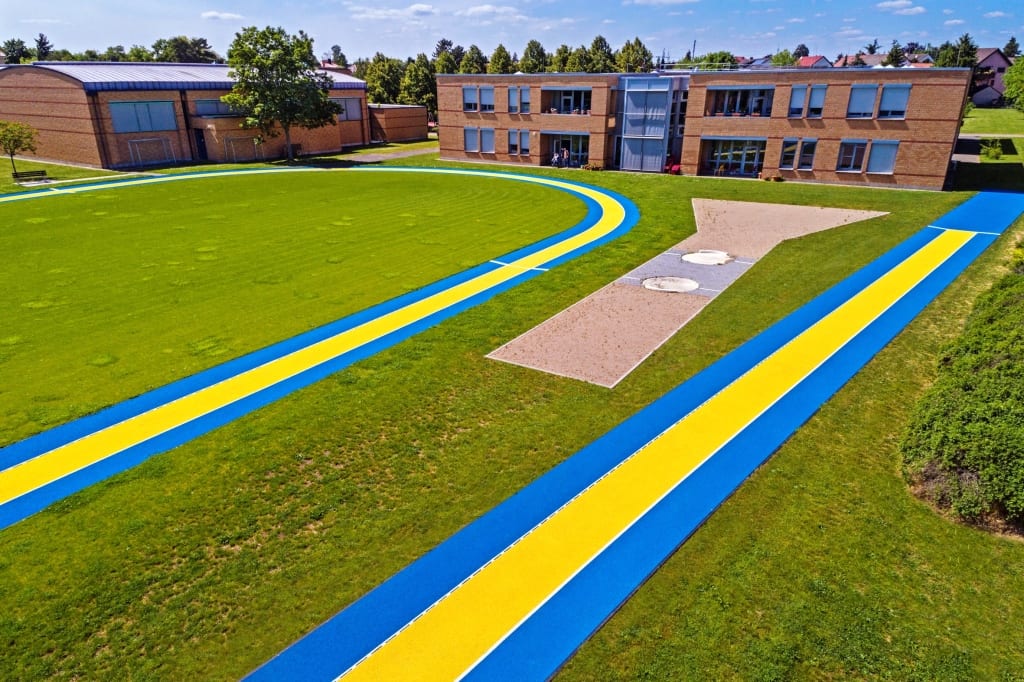 It is usually referred to only as the “blind school“. The correct designation is: Castle School Ilvesheim – State special educational and consulting centre with boarding school, with a focus on vision. Here, some of the sports facilities were renovated in autumn 2019 and an outdoor racetrack was installed using a Rekortan M sports surface from Polytan. It offers excellent acceleration performance and tread elasticity, and is the perfect choice for school sports facilities. It is particularly significant in Ilvesheim because of the colours.

Bright blue on both sides, and bright yellow in the middle. For this reason, the surface is also lovingly called the “Ikea track“ by the pupils – in reference to the Swedish furniture company’s logo. However, the choice of colour is no coincidence. It is due to the fact that the combination of blue and yellow forms the strongest contrast perceptible to the human eye, more so even than black and white, and is therefore still perceptible to people with significantly impaired vision. If they can see “Ikea” in Ilvesheim, they are on the right track.

Even totally blind people use the track. “Of course, this requires some practice,” explains Jessica Bahr, teacher at the SBBZ, who accompanies the runners and literally keeps them on a short leash. As their experience grows, runners successfully get round the track unaided, because it has a slight incline on the inside and outside. This means that the runner immediately notices when he deviates from the centre lane and can adjust to get back on track. It is important that the track is completely level, with a smooth transition to the adjacent pitch, and that there are no tripping hazards, such as holes, grass growth or moss. This is precisely why the previous track had to be replaced – it had already been closed for a long time for safety reasons.

This was a great disappointment to the pupils, because the SBBZ is a school with a distinct sports profile that primarily wants to convey the joy of movement to children and young people. This is not necessarily a matter of course for blind and visually impaired people, who are more cautious about movement due to the constant danger of colliding with obstacles and injuring themselves. In Ilvesheim, targeted support starts early with appropriate movement exercises to strengthen the back and neck muscles, develop stability and generally promote the enjoyment of movement. The newly laid round oval gives pupils the opportunity to run longer distances without problems.

In addition to school sports, SBBZ also offers a branch of competitive sports – with considerable success: Goal ball is the most popular ball sport for visually impaired people and the school boasts a few national players. Their aim is to participate in the next paralympics. They use the round oval for fitness and endurance training. Rekortan M‘s high load-bearing capacity also allows school wheelchair users to race laps on the newly laid track without causing damage.

During planning, the dispersal of surface water presented a particular challenge, as Rekortan M is waterproof. In the absence of any standards, a bespoke solution had to be found for this. The result: A channel was installed directly under the centre of the track, through which water can drain, however it has been completely covered so that it does not pose a trip hazard for the runners. The previous surface was equipped with hollow compartments so that the runners could hear whether they were still in the lane or had already deviated from it unintentionally. But this acoustic guide was unsuccessful. The surface was also waterpermeable and there were cracks along the hollow compartments.

The track’s ruggedness and its colour scheme convinced the planners in Ilvesheim to also renew the long jump system with the same sports surface – naturally also in the blue-yellow colour combination.