Orange and green in harmony 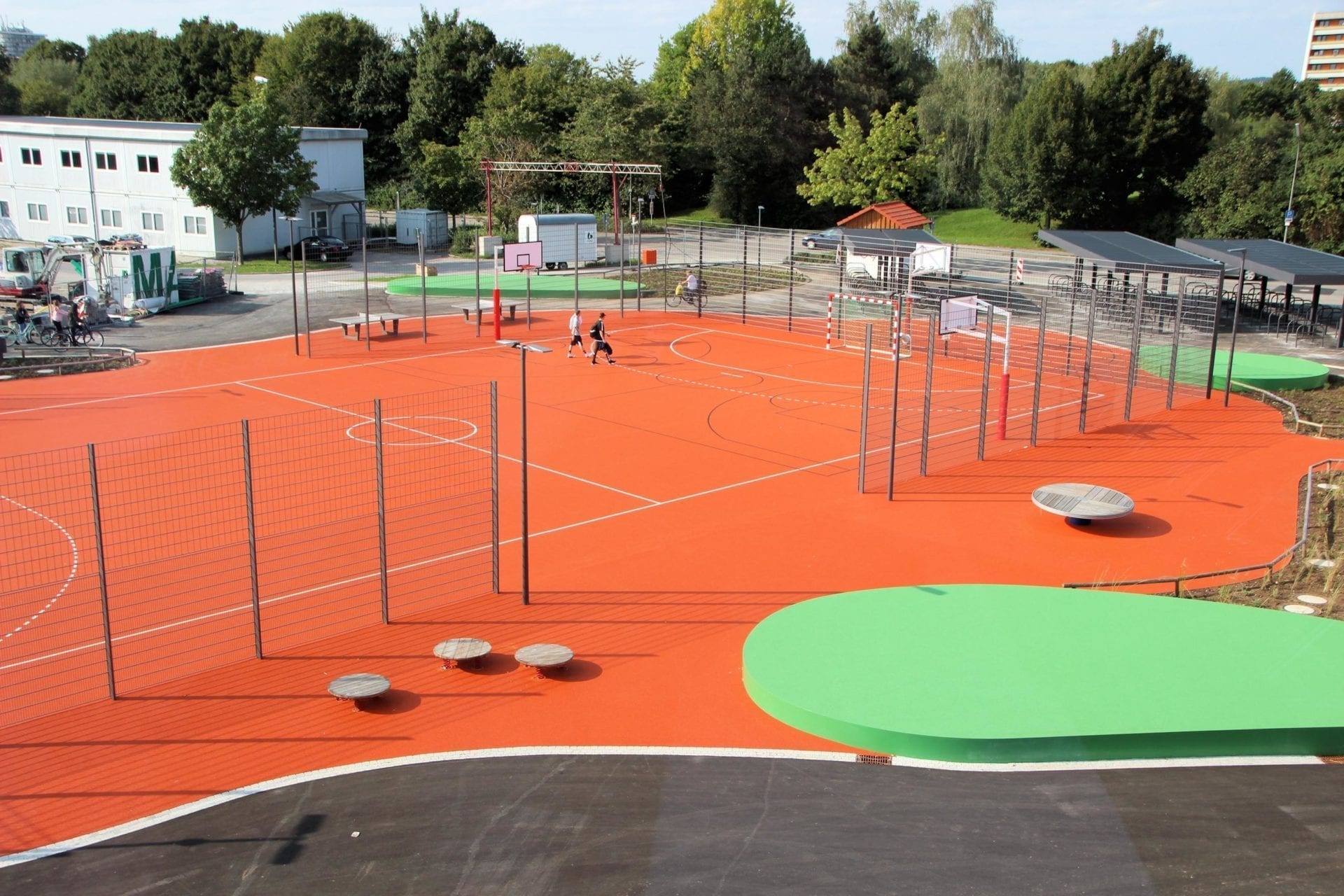 ORANGE AND GREEN IN HARMONY

“More beautiful, colourful and modern” than the previous structure – that’s how the replacement building of the Therese Giehse secondary school is described in the construction diary on the school’s website. The educational facility in Unterschleißheim, which entered use in September 2016, is extraordinarily colourful not only on the façade, but also in the outdoor area, where the colours of the synthetic surfaces in the courtyard pick up on the orangey green design concept of the building shell. Both the multipurpose pitch and three seating areas and the soft-impact surface under the climbing frame comprise synthetic surfaces from Polytan – the weather-resistant material dries out quickly and is pleasant to the touch throughout the year, according to the landscape architect responsible.

The competition for the new building was won by Diezinger Architekten from Eichstätt, while Munich landscape architects Adler & Olesch were responsible for designing the outdoor facilities. Planning began in 2013 and the new building was ready for occupation punctually for the start of the 2016/17 school year. The outdoor facilities, completed in July 2017, now stand where the old building used to be.
As part of the revamp of the outdoor area, the school’s management wanted not only a multipurpose pitch but also facilities for other games and sports such as table tennis, streetball and a climbing frame. Today the installations also include hopping boards and three organically shaped seating areas. These are available to the students both in breaks between classes and in their free time. The students of the neighbouring Carl Orff grammar school can also make use of them. A “green classroom” has been built on the rear of the new building as well.

When it came to the surface of the multipurpose pitch and of the additional sports and playing areas, the landscape architects opted for the PolyPlay S synthetic surface from Polytan. The bold orange shade of the surface picks up on the orange-green design concept of the façade as well as the green seating areas and the green soft-play surface under the climbing frame.

The PolyPlay S synthetic surface is a long-lasting, all-round sports surface that has a smooth yet non-slip surface and offers good ball bounce behaviour, making it ideal for school sports facilities. The managing director of Munich-based landscape architects Adler & Olesch, Ulrike Tuchnitz, also appreciates the water permeability, look and feel of the material: “The surface dries off quickly after rain, it’s not too hot in summer and not too cold in winter.” To ensure the whole courtyard looks more or less like a single piece – “without an ugly mix of materials”, says the planner –, the three organically shaped seating areas likewise consist of the easy-care, weather-resistant PolyPlay S in May green. The seating areas cover an area of over 200 m² in the courtyard and are 49 centimetres high – safety railings would have been required from half a metre.

Because of the increased risk of injury, the synthetic surface underneath the climbing frame is designed as a shock-absorbent PolyPlay FS soft-impact surface. This Polytan product – like the PolyPlay S – consists of two layers, with the top layer made of EPDM granules (rubber). The second, supporting layer is made of recycled materials and provides the requisite elasticity. The thickness of the base layer varies between 30 and 115 mm, depending on the critical drop height from the play equipment. There are soft-impact surfaces up to a drop height of 3 m, with a handrail required by law above this.